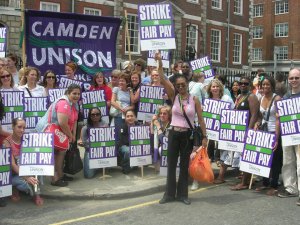 With the pay freeze having already reduced our real pay by at least 13% since 2009, and set to continue, Camden UNISON members vote to fight it.

UNISON nationally is consulting members on their views, and to feed into this, Camden UNISON recently set up an online vote for members to give their views on the continuing pay freeze.

We e-mailed all of our members whose e-mail addresses we have on our database who are either on NJC (which is the vast majority of council workers) or JNC (for youth and connexions workers) pay scales.

Members who voted overwhelmingly rejected the pay freeze and voted in favour of action, including strike action, to break the freeze.

95% of voters (322 members) voted to support national UNISON’s suggested pay claim of a “significant increase” across all pay points.

77% of voters (263 members) stated that they would be prepared to take strike action as part of a coordinated campaign in pursuit of one of these pay claims, with 22% (75 members) against.

If you did not receive a link to vote this probably means we do not have an e-mail address for you on our system. Please contact Paul England or Tsui Tsang at the branch office (020 7974 1169/ paul.england@camden.gov.uk / Tsui.Tsang@Camden.gov.uk)  or update your records online at http://camdenunison.org.uk.uk/update

This entry was posted in Uncategorized and tagged JNC, LB Camden, pay. Bookmark the permalink.