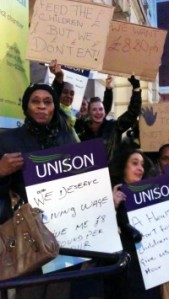 Kitchen staff who provide healthy meals to Camden school children lobbied the Town Hall during Living Wage Week to launch their campaign for the London Living Wage of £8.80 per hour.

As part-time women workers they protested against their poverty pay – most earn the national minimum wage of £6.31 per hour. In the same week the new London Living wage rate was announced at £8.80 an hour.

Camden Council now proudly proclaims it is a London Living Wage employer, but many contractors who provide Council services, still pay less than this. Caterlink, who employ the majority of Camden’s School meals staff, still employ them on £6.31 even though they have contracts in other authorities or educational workplaces where they pay the London Living Wage.

Some staff described their situation:

Worker A – I just work to pay bills and have to rely on my family to get me food.
Worker B – The wages are not right, I have to borrow money.
Both – The union has to campaign for the Living Wage for us because we work very hard to provide healthy meals for the children in our school
Worker C – on my wages I can’t afford to things with my family – even simple things like the cinema or treats for my son when he’s done good work at school, I can’t afford his trainers, I can’t visit my family who live around London. I want to fight for the living wage as it affects our children who don’t get any benefit from our work providing healthy meals for Camden’s school children. They see the worst of their parents when we have money stress as well as being physically exhausted at the end of the day.

We urge other Caterlink workers to join Camden UNISON today and get involved in the campaign. Contact Hugo Pierre (hugo.pierre@camden.gov.uk, 020 7974 3996) for more information.